Is Mass Caused By Curved Spacetime?


21 replies to this topic

Apologies if it was unclear, but the intent of my OP was more general. Restated, could ALL mass in existence be a product of curved spacetime rather than the inverse?

Apologies if it was unclear, but the intent of my OP was more general. Restated, could ALL mass in existence be a product of curved spacetime rather than the inverse?

I am not aware of any such theory.

It would seem to present enormous problems, for example in accounting for the masses of individual subatomic particles.

How so? By definition, curved trajectories constitute mass.

How so? By definition, curved trajectories constitute mass.

Eh? How does a car turning a corner "constitute mass"?

My theory was that our spacetime is riddled with infinite ADS spheres, unlike a wormhole matter doesn't go through it's just inside out along with the spacetime of that sphere. This is another way to perceive black holes. As the ADS spheres merge they grow in surface area which causes spacetime around their event horizon to contract in, creating a gravitational wave. The ADS spheres exist everywhere with an infinite variety of sizes. We're inside of a desitter sphere, which from the perspective of an ADS dimensions is itself an ADS sphere.

It being inside out means that when it merges with other ADS spheres falling into it's horizon from our perspective, actually emerge from the center of everything from the dimensions of it's perspective. From it's perspective, ADS spheres are in a state of eternal shrinkage at it's horizon, if enough new spacetime & matter isn't emerging from it's center, the horizon will retract. That's BH shrinkage from our perspective. There's no limit to how small or large these things can get, they are the source of all forces of nature.

Without them reality would be an infinite & eternal motionless structure that has no shape & never changes.

Well, Mass is caused by the fields that bind this energy into a compressed state such as the Color or Charge or Flavour, which do cause curvature of time-space having Energy/Momentum bound into them, in a way curvature does cause mass indirectly as these fields cause curvature as well but mass is not directly caused by curvature more of the binding Energy of these Forces, as Energy Outward is trapped against them. 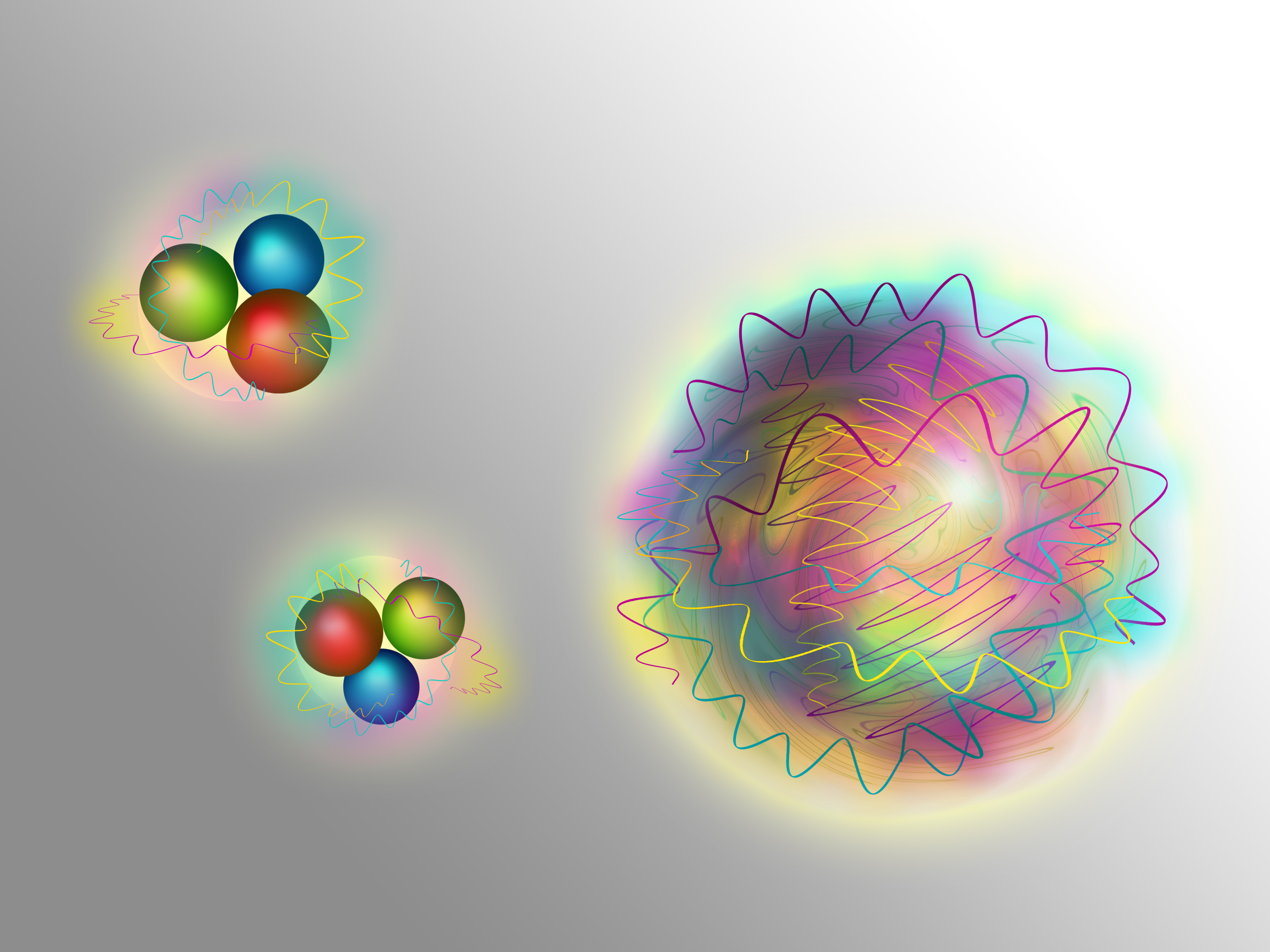 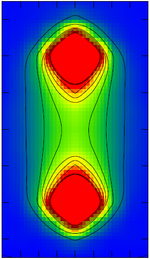 But, I am sure there are theories that suggest that, curvature directly causes mass, that would not be too far a stretch.

But, I am sure there are theories that suggest that, curvature directly causes mass, that would not be too far a stretch.

The standard model fails innumerably so I wouldn't say my theory is a stretch, everything fits together in my theory from the interatomic to well beyond our cosmic horizon

Can we prove beyond doubt that the quark theory is correct?

My understanding is that is precisely where modern physics is headed if not already there. Im an engineer, not a scientist, but from what I understand since quantum wave theory is most widely accepted and it is fruitful, and the Dirac equations gave root to such interpretation of mass under wave equations long ago, mass will eventually be explained in terms of fundamental dimensions of spacetime. Higgs field is a spacetime field that creates matter. The signs are everywhere.
This year, in a few months, the CIPM will redefine the unit of kg in terms of quantum constants. That’s historic and significant. They are doing the latest most accurate measurements right now of Planck’s constant for that purpose.
Planck’s constant is the one that contains kg. The rest of the units are mostly space and time. I am on the edge of my seat to find out what kg will be defined as.
So, in my opinion, to answer the OP, yes, all fields and waves quantum physics is about that.

Can we prove beyond doubt that the quark theory is correct?

Come on, Little Bang, you should know better than that!

It is almost a cliche that theories in science can never be proved true, only shown wrong or incomplete.

I asked a somewhat similar question about spacetime elsewhere [http://www.sciencefo...re/#entry356655]. but never got an answer of any substance.

But, as noted there, the "curvature" element of spacetime is said to cause a "warping" of space by the planet earth which amounts to 1 cm.  So would 1 cm warpage "produce" the entire earth, ya figure?

Well, maybe "time" creates the earth, eh?  Leave it to some modern day physicist to claim that.  "Time pointing downward" makes the planets move in orbit, causes mountains to crumble into the sea, etc., they claim.  Hell, why not have "time" produce it all ex nihilo ab initio, eh?

P.S.:  Please excuse the pretentious latin.  What I meant to say was "from nothing, from the beginning," ya know?

I should have said "Kronos" instead of time.  The greek myths are so much more vivid and entertaining than the ones these physicists come up with, know what I'm sayin?:

KRONOS (Cronus) was the King of the Titanes and the god of time, in particular time when viewed as a destructive, all-devouring force.  He ruled the cosmos during the Golden Age after castrating and deposing his father Ouranos(Uranus, Sky). In fear of a prophecy that he would in turn be overthrown by his own son, Kronos swallowed each of his children as they were born. Rhea managed to save the youngest, Zeus, by hiding him away on the island of Krete (Crete), and fed Kronos a stone wrapped in swaddling clothes.

By most standards, a guy who castrates his father and eats his children aint no nice guy, eh?

It's all starting to make sense now.  Time probably created both matter and gravity, just so muslims could throw homosexuals off of 10 story buildings, can't ya see?  The guy revels in sadistic ecstasy over the spectacle.

I'm expecting to win a Nobel prize in physics for my brilliance in putting this all together.

Jim Baggott, a former physics professor who has written 10-12 of books  on physics topics wrote one called "Farewell to Reality: How Fairy-tale Physics Betrays the Search for Scientific Truth."  He notes that

Albert Einstein once warned: "Time and again the passion for understanding has led to the illusion that man is able to comprehend the objective world rationally by pure thought without any empirical foundations – in short, by metaphysics." Now, metaphysics is not science. Yet a string of recent bestselling popular science books, supported by press articles, radio and television documentaries, have helped to create the impression that this is all accepted scientific fact. Physics has gone too far....

When you start asking 'Do we live in a hologram?' then you are crossing into metaphysics, and you are heading down the path of allowing all kinds of things that have no evidence to back it up, like creationism.

I don't advocate any kind of major change of direction. I just want us all to acknowledge the difference between empirically based scientific theories and metaphysics, or pseudo-science. I would question whether we should be throwing all our eggs in the string theory/multiverse/cosmic landscape basket. Perhaps it's time to consider other ways we might address the problems with the "authorized version" of reality, wherein all the available observational and experimental data are essentially secondary to the prevailing theoretical structures.

Even Einstein recognized the tendency to "do physics" by metaphysical speculation, and he should know, eh?

Jim Baggott argues that there is no observational or experimental evidence for many of the ideas of modern theoretical physics: super-symmetric particles, superstrings, the multiverse, the holographic principle, or the anthropic cosmological principle. These theories are not only untrue, it is not even science.

It is fairy-tale physics: fantastical, bizarre and often outrageous, perhaps even confidence-trickery. This book provides a much-needed antidote. Informed, comprehensive, and balanced, it offers lay readers the latest ideas about the nature of physical reality while clearly distinguishing between fact and fantasy

Math is not physics.  Many physicists don't seem to realize this.

Good old Baggotty Jim. We used to go drinking in the pubs around Waterloo when he and I were in the same department at Shell, in the early 90s. I have an autographed copy of "The Meaning of Quantum Theory", which he finished while working in the Lubs Division.

He's right that these physics speculations are not testable and do not really meet the criterion for being proper science. They are more metaphysical physics, really. But if one day somebody can think up testable predictions from these speculations, then they will at that point become science.

So a bit of dreamy metaphysics round the edges is fine, so long as it is not presented as confirmed science.

So a bit of dreamy metaphysics round the edges is fine, so long as it is not presented as confirmed science.

The problem isn't really just any one fictional speculation, it's the large number (often a majority) of mainstream physicists who believe them.  They've lost their bearings.  They've become gullible instead of maintaining the skepticism required by science.  It seems that nothing is too absurd to discourage would-be believers.

It all started with special relativity and just got worse with time.  Einstein often expressed his regret for encouraging and inspiring the Heisenberg's of the world with his early, naive, approach to "science" (positivism, which he later called "nonsense," even while admitting to having previously adhered to it).

Back to Alternative theories
Reply to quoted posts     Clear