I was wondering what people thought about the idea of Universal Income? What if everyone were to make a livable wage of $50,000 a year for free supplied by the government, would this not end poverty as we know it? Would it not increase economic growth and overall demand for everything making more taxable dollars for companies? 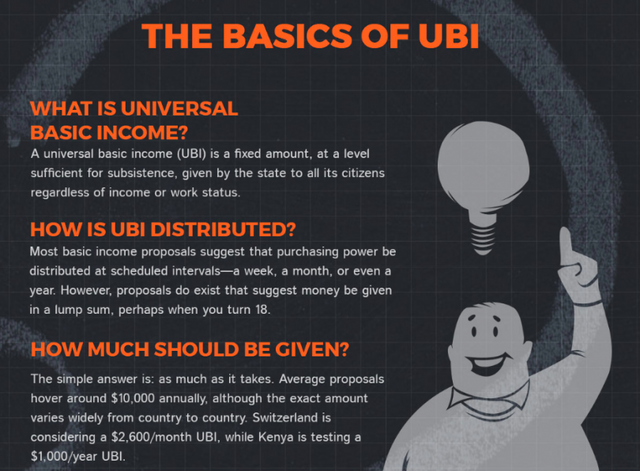 Interesting concept, not unlike giving everyone a basic set of credits that they can survive on, then any additional credits earned through some kind of work.

The idea might fuel inflation without price controls, so that 50,000 dollars today would be like 5 dollars tomorrow, unless the government was to introduce price control and fair trading practices, which might not be the ideal for the greedy.

How would the dollar then be valued globally if the rest of the world did not do the same, would there be implications there for trade.

I was wondering what people thought about the idea of Universal Income? What if everyone were to make a livable wage of $50,000 a year for free supplied by the government, would this not end poverty as we know it? Would it not increase economic growth and overall demand for everything making more taxable dollars for companies?

My first question would be where would the government get the money from if nobody is working and paying taxes? I doubt Bill Gates and Bloomberg and all the other billionaires are going to give up their billions to make it happen. One thing to always remember is if it's coming from the government it isn't free. Somebody has to pay for it. I am pretty sure they don't have golden goose.

Universal income - great idea, but with an unusual name, and that name does not explain the main idea at all. This is also indicated by the course of the debate so far. Just as the term "Life Savings" already exists, so for the idea of "universal income" a better term would be "Salary for Life" or "Living Salary"!
As everything that "serves us for life" comes from the energy of the Sun, and that energy is everyone's, so the means of living for everyone must be accessible to everyone. This revenue is nothing "new" because it has always existed, just called differently and differently "distributed and shared". The husband "must" pay for the services of his wife, and together they "must" care for their children and parents. The state "must" ensure a minimum standard of living for all its citizens! In addition, "capitalists" swear by "market and supply and demand", and how does that "market" work if the vast majority of citizens are excluded from it?
And who will pay for it? From the foregoing it is clear that this question is quite irrelevant because "the resources for it already exist", they are only called differently! The state owns a number of funds that already raise money for this purpose! The only question is, do these funds currently serve the purpose for which they were raised?
And then who will work if everyone gets a "universal income"? And who "works" today? All of today's "workers" can be divided into three groups (thirds):
The "first third of workers" work hard and diligently to produce all that society needs and consumes. They pay taxes! They have minimum wages!
The "second third of workers" are doing completely useless jobs or just "acting" to do something. They have average salaries!
The "third third of workers" are those who don’t know anything useful to do, and when they work, they only do the damage. They have the highest salaries!
Therefore, even with "universal income", the "picture of the distribution of labor" in society would remain the same, only the salaries of the first and third groups would have to be replaced!
And what is "the biggest problem" of that "universal income"? That is our social political order! In a "democracy" households and citizens "pay expensive energy", while energy for "capitalists" is cheap (free!)! Capitalists, in fact, expensively sell "cheap" energy to citizens and so uncontrollably "Warm up our Planet"! Blessing in disguise is that there is still no such universal income! With that income, citizens could buy even more energy, which would be "deadly" to our the Planet! Therefore, the prerequisite for introducing "universal income" is abandoning false "democracy" and introducing "energocracy". In Energocracy, the price of energy (labor) should be the same for everyone! Recovered energy should replace profit! Cheers and Saw!