102 replies to this topic

Where is my crank stamp at, I just had it. 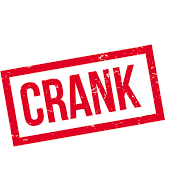 Back to Strange Claims Forum

Also tagged with one or more of these keywords: relativity, einstein, physics