How Black Holes Could Solve Most Grand Unification Problems

The right theory of everything may lead us to stable fusion, which can cheaply turn small amounts of lead into smaller amounts of gold, which can then be replicated into large amounts of gold. Who said money doesn't grow on trees? A ToE could tell us how fast future spacecrafts could ever possibly go. A ToE could provide avenues for computation & communication that bypasses the speed of light.

This is a theory of everything. It unifies general relativity with quantum mechanics & defines all the missing matter in the universe. An added bonus is that, unlike any other theory in physics, it fully conceptualizes the 4th dimension.

This is difficult to put into words so let's start with the idea that the smallest objects we can measure (the subatomic world) is a miniature version of the largest objects we can measure (the CMB & the current observable universe), and then apply special relativity to define time & motion in such miniaturized cosmoses. This kills two birds with one stone; for one, it tells us what's beyond the cosmic event horizon, and two, it tells us what's inside of a subatomic particle.

Let's start with the atom: we have this notion of black hole atoms, now suppose that these micro black holes are crucial in the formation of all atoms in a miniaturized version of our universe (microverse) as well as the atoms that form the basis of matter in a larger universe (superverse), which themselves have greater superverses & lesser microverses, respectively, with infinite regress. This is what we get: 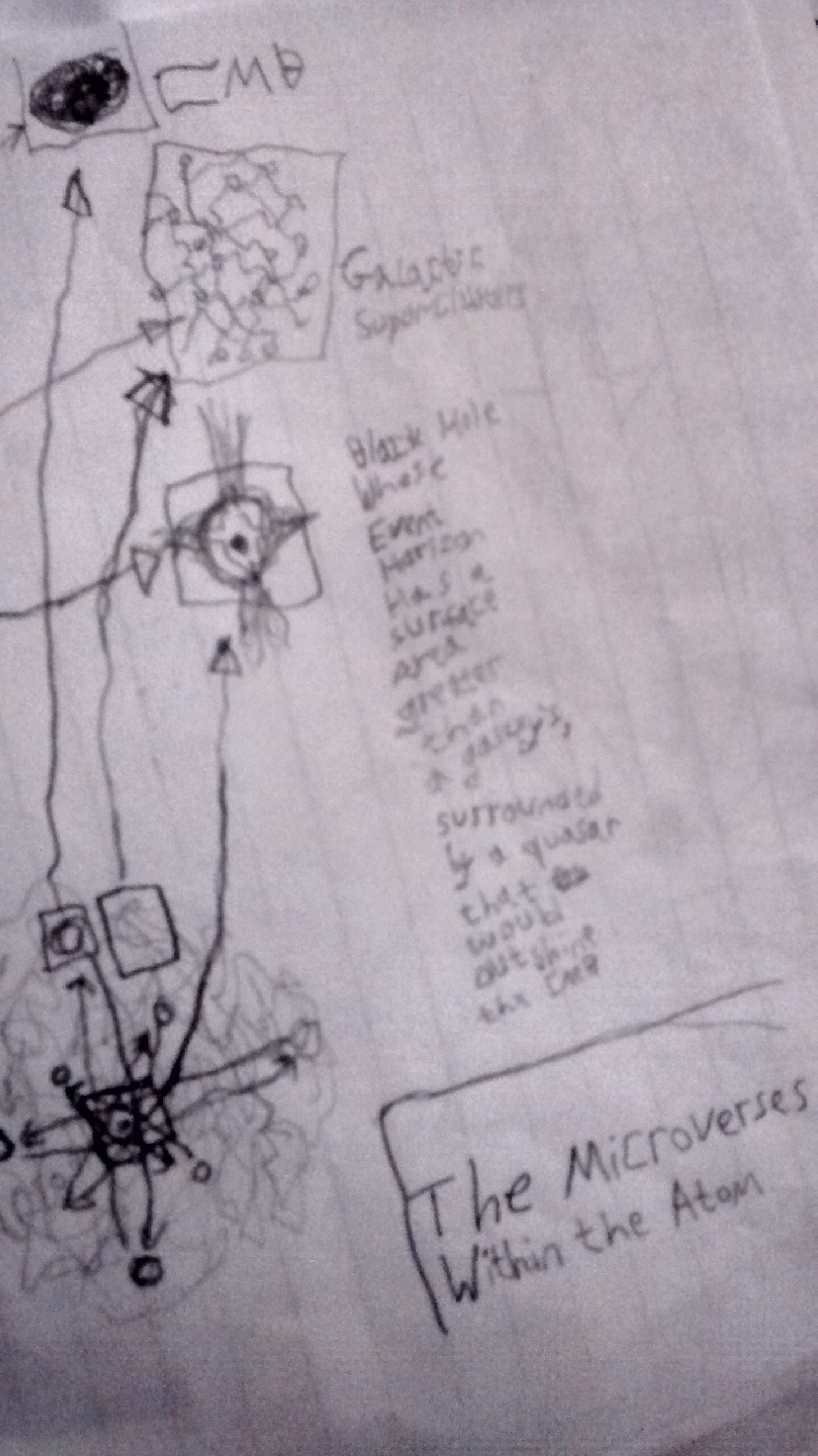 Distortions in spacetime around black hole atoms change location, dips in the fabric of spacetime elliptically orbiting the micro mother black hole (Planck particle, micro cosmic unit) at the center of the atomic nucleus. These orbital dips in spacetime are hot convergence points in waves where particles form around atomic nuclei. This explains dark flow & cosmic bruising. However, when applied to a microverse, the cosmological constant in accelerated fractional transplanckian spacetime is how radiation propagates through space. Adjacent microverses overlap as they expand, reigniting quark-gluon plasma states, which we observe as particles. I'd look at a photon as a microverse in a hot dense state, or the electron that orbits the micro-SMBH atomic nucleus as a larger micro-plasma sphere with super-micro black holes in it. These little CMBs are gravitational convergence points in subatomic particle waves, which are microverses that are too cool & spread-about to actually see.

Protons or electrons in fact as points where sub-quantum bits in continuous spacetime (such as particle waves) face the greatest compression force (into non-wave particles) within atomic orbits. Apart of what the microverse interpretation entails, is that as space becomes infinitesimal, & time gets contracted nigh-infinitely, matter can assume the exact same forms as it does as space becomes vast & time dilates to a near stand-still (the cosmic event horizon). This is because the ratio between the size of an atom & a galaxy is the same in a microverse as it is in the universe, so time dilation is equitable in exactness & the same forces are experienced by matter on different scales, & the patterns of matter formations become poetically reemergent. The reason we can't see past the cosmic event horizon is because before the CMB, it was slowly converging adjacent universes in a state exactly as ours is now, which would have been outshone by the CMBR that proceeded it.

Now let's look at that idea with stars, objects that are constantly undergoing sustained fusion to excrete a million tons of matter into the emptiness of space  per second in the form of radiation. You can see how the merger of these micro black hole atoms can explain the very fundamentals of fusion. Let's look at the surface of a star:

This microcosmic radiation also explains both the observer effect & quantum entanglement without any spooky action at a distance simply using the the addition of velocities that you'd expect when a photon traveling at c produces a gravity wave that also propagates at c, the two velocities add up. Let's reexamine the double slit experiment with this new approach:

What I haven't explained is that matter with positive dimensions doesn't get turned inside out with the spacetime that enters the event horizon of the black hole, matter cannot pass into perpendicular dimensions, instead the micro black holes within all quasar matter combines with the macro black hole (parallel spacetimes merging in anti desitter space leading to dark energy there).

This is why matter jets are so powerful around black holes, & the source of FRBs & OMG particles (relativistic protons) - the microverses of these relativistic particles don't have any microblack holes to delay expansion at first until they pick them up as they meet other radiation propagating through space. Stripping microverses of their black holes gives you more energy than matter/anti-matter annihilation.

In superspace, these black holes are enormous relative to us, but black holes have no size limit given enough matter is there to feed them. Now mind you, theoretically there isn’t an upper limit to them. You could, if you had godlike powers, collect every single bit of matter in the Universe, cram it into one spot, and have a truly and literally cosmic black hole with a sextillion times the Sun’s mass. More or less.. Indeed, our universe could be the interior of a very enormous black hole itself.

Wikipedia explains the bulk of that pdf in layman's terms: Imagine a gravitational field, without a surface. Acceleration due to gravity is the greatest on the surface of any body. But since black holes lack a surface, acceleration due to gravity increases exponentially, but never reaches a final value as there is no considered surface in a singularity. In quantum mechanics, the black hole emits Hawking radiation and so can come to thermal equilibrium with a gas of radiation (not compulsory). Because a thermal-equilibrium state is time-reversal-invariant, Stephen Hawking argued that the time reverse of a black hole in thermal equilibrium is again a black hole in thermal equilibrium.[2] This may imply that black holes and white holes are the same object. The Hawking radiation from an ordinary black hole is then identified with the white-hole emission. Hawking's semi-classical argument is reproduced in a quantum mechanical AdS/CFT treatment,[3] where a black hole in anti-de Sitter space is described by a thermal gas in a gauge theory, whose time reversal is the same as itself.

Us being in the interior of a black hole also accounts for dark energy; The inside-out black hole-ness is a novel idea, like the notion we're on an "unbound" 3D surface of a 4-spatial dimension sphere.... The universe begins as an infinite & "unbound 3D surface", a clump of solid reality on this "4-spatial dimension sphere", its infinite size causing it to instantly break down to fill both of the infinite perpendicular & parallel dimensions of the hypersphere, forming into the chiral structure in constant motion explained in this thread. In a sense, this negative spacetime would account for the Quantum Eraser effect. This Big Collapse doesn't actually happen though, as it has been occurring forever. No big bang, no zero time. What we perceive as matter & energy are fluctuations in the density medium of reality, what I mean by "reality" is the absence of nothingness, 3 dimensional in nature & giving rise to space & time.

Ya, I agree with some parts of this but other parts I do not. I have thought before that the bosons could be Black-holes of different forces like the photon as a charge black-hole and that the universe is just a large black-hole but beyond that I have to say I disagree with the Black-hole Atom idea as it is presented.  Most of the things you said about black-holes seem feasible, but the things about the observer effect are a bit far fetched. Of course, Nano-robots can swarm intelligence and fill the entire universe, that is a given.

Back to Alternative theories
Reply to quoted posts     Clear