11 replies to this topic

Well, today makes it a month since I quit smoking cold turkey (yum, cold turkey).  I had smoked for 20 years, quit for 10 years, then started again a week before we left for the UK in 2011.  We were going to see  friend who was dying of cancer and for whatever reason I had to have my cancer sticks.  I am currently using something new to take the edge off.  I believe it is called Heroin.

But seriously, I have heard that Nicotine is more addictive than Heroin although the receptor pathway seems different.

Nicotine is a potent stimulant and parasympathomimetic alkaloid found in the nightshade family of plants.[5] Nicotine acts as an exogenous receptor agonist at most nicotinic acetylcholine receptors (nAChRs),[6][7][8] except at two nicotinic receptor subunits(nAChRα9 and nAChRα10) where it acts as a receptor antagonist.[6]

Nicotine constitutes approximately 0.6–3.0% of the dry weight of tobacco.[9] Usually consistent concentrations of nicotine varying from 2–7 µg/kg (20–70 millionths of a percent wet weight) are found in the edible family Solanaceae, such as potatoes, tomatoes, and eggplant.[10] Some research indicates that the contribution of nicotine obtained from food is substantial in comparison to inhalation of second-hand smoke.[10] Others consider nicotine obtained from food to be trivial unless exceedingly high amounts of certain vegetables are eaten.[10] It functions as an antiherbivore chemical; consequently, nicotine was widely used as an insecticide in the past,[11][12] and neonicotinoids, such as imidacloprid, are widely used.

Nicotine is highly addictive.[13][14][15] It is one of the most commonly abused drugs.[16] An average cigarette yields about 2 mg of absorbed nicotine, while high amounts can be harmful.[17] Nicotine induces both behavioral stimulation and anxiety in animals.[4]Nicotine addiction involves drug-reinforced behavior, compulsive use, and relapse following abstinence.[18] Nicotine dependenceinvolves tolerance, sensitization,[19] physical dependence, and psychological dependence.[20] Nicotine dependency causes distress.[21][22] Nicotine withdrawal symptoms include depressed mood, stress, anxiety, irritability, difficulty concentrating, and sleep disturbances.[1] Mild nicotine withdrawal symptoms are measurable in unrestricted smokers, who experience normal moods only as their blood nicotine levels peak, with each cigarette.[23] On quitting, withdrawal symptoms worsen sharply, then gradually improve to a normal state.[23]

When taken orally, Heroin undergoes extensive first-pass metabolism via deacetylation, making it a prodrug for the systemic delivery of morphine.[62] When the drug is injected, however, it avoids this first-pass effect, very rapidly crossing the blood–brain barrier because of the presence of the acetyl groups, which render it much more fat soluble than morphine itself.[63] Once in the brain, it then is deacetylated variously into the inactive 3-monoacetylmorphine and the active 6-monoacetylmorphine (6-MAM), and then to morphine, which bind to μ-opioid receptors, resulting in the drug's euphoric, analgesic (pain relief), and anxiolytic (anti-anxiety) effects; heroin itself exhibits relatively low affinity for the μ receptor.[64] Analgesia follows from the activation its G-protein coupled receptor, which indirectly hyperpolarize of the neurone, reduce the release of nociceptive neurotransmitters, and hence cause analgesia and increased pain tolerance.[65]

Unlike hydromorphone and oxymorphone, however, administered intravenously, heroin creates a larger histamine release, similar to morphine, resulting in the feeling of a greater subjective "body high" to some, but also instances of pruritus (itching) when they first start using.[66][67]

Normally GABA, released from inhibitory neurones, inhibits the release of dopamine. Opiates, like heroin and morphine, decrease the inhibitory activity of such neurones. This causes increased release of dopamine in the brain which is the reason for euphoric and rewarding effects of heroin.[68]

Both morphine and 6-MAM are μ-opioid agonists that bind to receptors present throughout the brain, spinal cord, and gut of all mammals. The μ-opioid receptor also binds endogenous opioid peptides such as β-endorphin, Leu-enkephalin, and Met-enkephalin. Repeated use of heroin results in a number of physiological changes, including an increase in the production of μ-opioid receptors (upregulation).[citation needed] These physiological alterations lead to tolerance and dependence, so that stopping heroin use results in uncomfortable symptoms including pain, anxiety, muscle spasms, and insomnia called the opioid withdrawal syndrome. Depending on usage it has an onset 4–24 hours after the last dose of heroin. Morphine also binds to δ- and κ-opioid receptors.

The friend who was dying of cancer had metastatic breast cancer.  She had a double mastectomy about 8 years earlier and appeared to be in remission, but the cancer came roaring back very quickly.

A bit of travel advice for those going to London: Fly into Gatwick instead of Heathrow, which is one of the busiest airports in the world.  The Gatwick Express is the subway train into downtown London that travels about 60 mph across the countryside.  Get an "Oyster Pass" before you head over.  This reloadable card will  get you on to the trains and double-decker buses without having to fumble with the strange currency while juggling exchange rates in your head.  We stayed at the Copthorne Tara hotel which was just a short walk around the corner from Victoria Station, High Street Kensington.   I have driven right-hand drive cars in Jamaica and the Bahamas, but I was not about to attempt driving in that traffic.  Shakespeare's Pub is in walking distance in the other direction and is just down the street from the back entrance to Buckingham Palace.

I have had to adjust my insulin as a result (from second link).

Nicotine also inhibits the release of insulin from the pancreas, a hormone that is responsible for removing excess sugar from a person's blood. This leaves the smoker in a slightly hyperglycemic condition, meaning he or she has more sugar in the blood than is normal.

High blood sugar acts as an appetite suppressant, which may be why smokers experience that cigarettes reduce the feeling of hunger.

I quit smoking again on January 18, and for the most part have gone cold turkey for the last 35 days.  I admit to having used about a dozen leftover 14mg nicotine patches (prescription)* from the last time I quit whenever I think about putting one on, but I really don't think I need them.  I was smoking about 8-12 "Angel Farts" (Marlboro Menthol Silver 100's) a day.  Those used to be called "Ultra-Light" before the Surgeon General decided in his infinite infantile wisdom that "Ultra-Light" implied a safer cigarette and eliminated the "Light" and "Ultra-Light" designations.  His omnipotent opinion aside, the lights had less tar and nicotine than the full flavor, and the ultra-lights had less than the lights.  Anyhow, nicotine patches are available in 21mg, 14mg, an 7.5mg strengths and they do work if your head is in the right place and your follow the directions.  If you smoke and want to quit, avoid smokey bars, coffee, and beer for a few weeks until you get over the association with cigarettes.  Don't waste your time with pills, hypnotherapy or other means of draining your wallet without results.  Feel free to post here if you need support.

*I opted for the prescription patches because they were cheaper after insurance than the OTC variety.  Check with your insurance company.

" *I opted for the prescription patches because they were cheaper after insurance than the OTC variety.  Check with your insurance company."

The retail price for a two week supply of nicotine patches is $20-30.  I think my insurance co-pay was $10 for a 30 day supply.  Even at retail prices it is still far cheaper than cigarettes.  Anyhow, you should only be on the patches for a month or two versus being on cigarettes until you die horribly.  At $5.00 a pack with a pack a day habit, the annualized cost is $1825.  A pack and a half a day habit would run $2737.50 a year.  I understand the price per pack in New York is over $8.00 and I have no idea about out in California.  Anyone have any personal knowledge?

During my 14 day stay in a private nursing home a couple of years ago, it was always entertaining speculating on which wheelchair bound patient on oxygen might burst into flames while smoking in the courtyard. 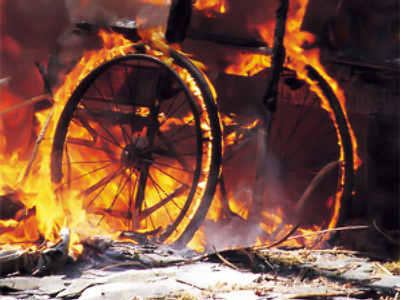 Those nicotine patches are great.  Just roll them up and smoke 'em.  But seriously, I think I used 8-10 patches in the first few days of the 37 days since I quit.  I haven't had any cravings, and quite frankly I am done with tobacco.  Now about the heroin...

It is 43 days since quitting cigarettes and about 30 days since I last used a patch so I think I am over tobacco...AGAIN.  I really haven't had any cravings this time around, but then I was just barely smoking (see post #5 above).

It is 10 weeks since I quit smoking again and I appear to be over it...again.  As I said above I used the 14mg nicotine patches for several days after quitting before I decided I didn't need the help.  I encourage anyone out there who still smokes to give it up while you still can.

It is now 11 weeks (78 days) since I quit again and I still haven't killed anyone (yet).  Not to say that there haven't been a few close calls.

Coming up on 5 months without cigarettes in just a few days and I am starting to regain my will to live.