If you have been reading my posts you understand CRISPR by this point but there are other things about CRISPR which are not understood. The ability to cleave upon a gene and insert the protein that constantly cleaves upon said gene into a virus that integrates it's genome allows for Gene Disruption, it allows for the creation of Ethnic Genetic Weaponry  to choose a gene then remove it from the human genome and the creation of infection agents that do this called "Gene Disruptors". For instance, one could selectively target the gene that produces insulin in the human body then remove it from every cell's genome using CRISPR inserted into a Virus with guide RNA targeting mechanisms. If the CRISPR Guide sequence was also inserted into the genome then even gene therapy could not fix this genetic targeting of said sequence along with the CRISPR insert, meaning it would forever cleave upon that target and even new CRISPR sequences would cleave upon that target being a permanent change.  It has been said that Synthetic Biology is dual use meaning can be used for hostile purposes and healing purposes, this is a hostile usage of CRISPR as a Auto-Gene Disruptor instead of its intended usage. If said genetic differences are apparent such as the genetic differences between races and species, this could be used maliciously to target ethnic and species groups with genetic differences only cleaving upon their version of the gene or allele of the gene. This being one of the alternate uses for CRISPR as a Genetic Disruptor that purges those with certain genes, I will not go into details about how to create such a system only that it is possible. 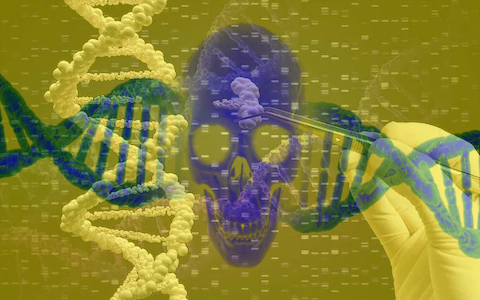