With the people at Harvard having tested my theory I go forward with the "Longevity Vaccine", 5 days ago it was proven that multiple genes of the same type may slow the aging process on mice. Today, I will design vaccination to aging using other genes which I think maybe useful in the genome as a more extensive rewrite. Using the 90,000 bp Hybrid Vector as the transfer vector, I can transfer far greater amounts of genetic material than standard Retroviral Vectors or Adenoviral Vectors being that they have a hard cap on genetic transfer of around 5 to 11 thousand base pairs. If needed I could even use the T4-AAV Vector that has a transfer amount of 170,000 bp. It seems Hybrids are the way to go in the aspect of carrying capacity.

It is well understood how to transfer the needed genes but what genes should be transferred is the question recently in the Harvard study FGF21, sTGFβR2, and αKlotho were used to reversed several age related diseases in mice from over expression of the genes but I would like to take a different approach while these could be added too. I seek to keep the overall genetic health of the genome better by over-expressing DNA Repair pathways to keep the DNA healthy, there will be a overall greater amount of DNA repair genes active to keep the DNA from getting to that point. 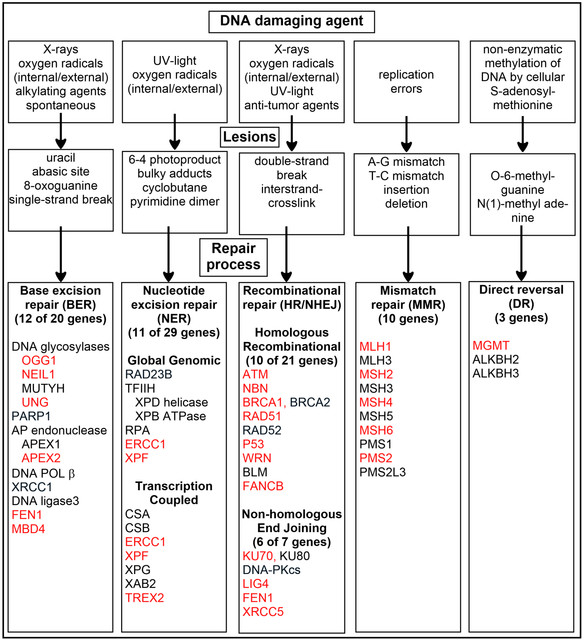 The key is to over express all the genes related to DNA Repair in this chart by insertion in one of these large carrying capacity vectors which each of these repair genes have a different type of DNA repair that they do. Inserting them all many times into the genome should keep your DNA from actually wearing out. Just as a normal vaccine protects against a Virus or Bacteria this vaccine protects against aging.

Secondly, Genes from other animals could be used that Repair DNA for instance the DNA Repair Pathways from a lobster could be inserted into the genome, which remains to be tested but could give you the extended lifespan of a lobster which lobsters are known to have a very long lifetime due to their DNA Repair Pathways.