12 replies to this topic

While in the Yucatan Peninsula of Mexico, we visited a coupe of Cenotes.  There are no creeks, streams, rivers, ponds, or lakes there, at least not on the surface.  All of the water is underground because of the rock being fractured by the Chicxulub asteroid impact that wiped out the dinosaurs.

The Chicxulub Crater lends support to the theory postulated by the late physicist Luis Alvarez and his son, geologist Walter Alvarez, that the extinction of numerous animal and plant groups, including non-avian dinosaurs, may have resulted from a bolide impact (the Cretaceous–Paleogene extinction event). Luis and Walter Alvarez, at the time both faculty members at the University of California, Berkeley, postulated that this enormous extinction event, which was roughly contemporaneous with the postulated date of formation for the Chicxulub crater, could have been caused by just such a large impact.[43] The age of the rocks marked by the impact shows that this impact structure dates from roughly 66 million years ago, the end of the Cretaceous period, and the start of the Paleogene period. It coincides with the K–Pg boundary, the geological boundary between the Cretaceous and Paleogene. The impact associated with the crater is thus implicated in the Cretaceous–Paleogene extinction event, including the worldwide extinction of non-avian dinosaurs. This conclusion has been the source of controversy.

In March 2010, forty-one experts from many countries reviewed the available evidence: 20 years' worth of data spanning a variety of fields. They concluded that the impact at Chicxulub triggered the mass extinctions at the K–Pg boundary.[44][45] In 2013 a study compared isotopes in impact glass from the Chicxulub impact with the same isotopes in ash from the boundary where the extinction event occurred in the fossil record; the study concluded that the impact glasses were dated at 66.038 ± 0.049 Ma, and the deposits immediately above the discontinuity in the geological and fossil record was dated to 66.019 ± 0.021 Ma, the two dates being within 19,000 years of each other, or almost exactly the same within experimental error.[46]

The theory is now widely accepted by the scientific community. Some critics, including paleontologist Robert Bakker, argue that such an impact would have killed frogs as well as dinosaurs, yet the frogs survived the extinction event.[47]Gerta Keller of Princeton University argues that recent core samples from Chicxulub prove the impact occurred about 300,000 years before the mass extinction, and thus could not have been the causal factor.[48] However, this conclusion is unsupported by radioactive dating and sedimentology.[44][46]

The main evidence of such an impact, besides the crater itself, is contained in a thin layer of clay present in the K–Pg boundary across the world. In the late 1970s, the Alvarezes and colleagues reported that it contained an abnormally high concentration of iridium.[49] Iridium levels in this layer reached 6 parts per billion by weight or more compared to 0.4 for the Earth's crust as a whole;[50] in comparison, meteorites can contain around 470 parts per billion of this element.[51] It was hypothesized that the iridium was spread into the atmosphere when the impactor was vaporized and settled across the Earth's surface amongst other material thrown up by the impact, producing the layer of iridium-enriched clay.[52] Similarly, an iridium anomaly in core samples from the Pacific Ocean suggested the Eltanin impact of about 2.5 million years ago.[53][54]

I REALLY need to copy all of my photos from the flash cards to the hard-drives.

...and you thought you were having a bad day? 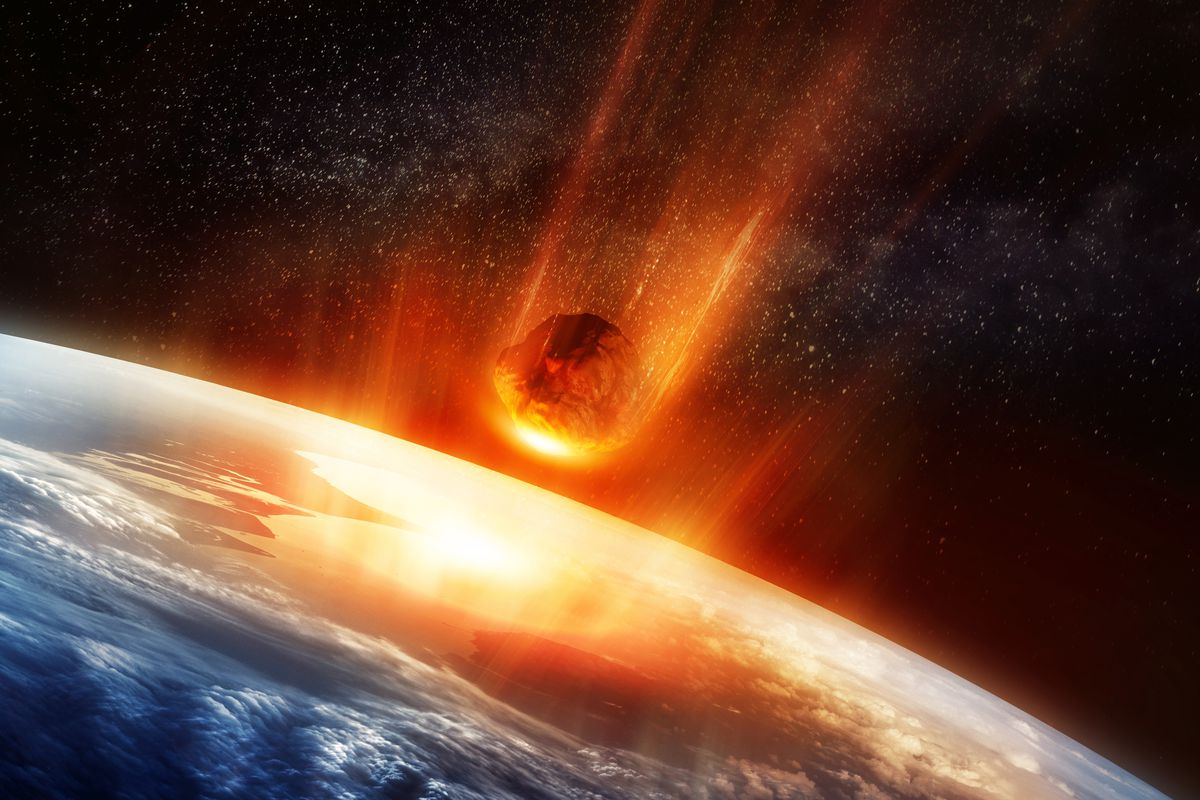 I don't know if this adds anything.  It was in today's Science Daily.  Asteroid or volcano?

I don't know if this adds anything.  It was in today's Science Daily.  Asteroid or volcano?

I am not really sure, my memory of that day is a little fuzzy.  I admit I was a little hungover.

But seriously, I have long believed the asteroid impact caused the volcanic eruption, and the one-two punch wiped out most terrestrial life.

I am not really sure, my memory of that day is a little fuzzy.  I admit I was a little hungover.

But seriously, I have long believed the asteroid impact caused the volcanic eruption, and the one-two punch wiped out most terrestrial life.

And isn't that pretty much what they are saying?

And isn't that pretty much what they are saying?

Not exactly.  The article poses a 30-50,000 year period between events.  My opinion is that the shock wave from the asteroid impact triggered the eruptions.

What’s interesting about the dinosaur extinction is only the avian dinosaurs (ancestors of today’s birds) survived.

But it wasn’t because they were fliers; in fact, the arboreal (tree dwelling) avian dinosaurs also went extinct and only the small-bodied and ground-dwelling avians survived, including ancient relatives of ducks, chickens, and ostriches.

Why this is so is the subject of a new hypothesis, mentioned in this National Geographic article.

(Has some nice illustrations but copyrighted)

Sorry, but I tried to get a smaller image of Homer, but the site did not like the image extensions and this is the only one that would load.

This video summarizes all of the mass extinctions to date.

Have land, will travel.

Back to Earth and Climate Science
Reply to quoted posts     Clear